We will be doing a set of interviews on this blog, so who better to start with than Carin Goldberg? Looking at Carin’s work is like owning my own Euphio (a fictional happiness-inducing device in a 1951 short story by Kurt Vonnegut). It makes me giddy. There are so many nuances of pleasure to be found in the way she solves her design problems it’s maddening.

Although Carin has been interviewed many times over the years and I am sure Debbie Millman has had her online on Design Matters, it’s been a while. I occasionally come upon her old work and recently, a few new book covers for Other Press. But I was curious, I wanted to know first hand. I also feel that knowing the career trajectory, and being familiar with the work of prominent designers is our duty and obligation as young guns on the scene. It helps put our work in perspective and obviously provides a treasure trove of visual information for us to take examples from and try our best to apply in our work, in an informed, appropriate context. Somewhere along the line, we start to “get” what these designers were trying to do, whether that be in relation to a particular project/client relationship, in context of the socio-political climate, or simply as personal explorations of pushing the limits of visual communication.

We hope you enjoy this pilot interview and official launch point for our blog. Bon appétit! 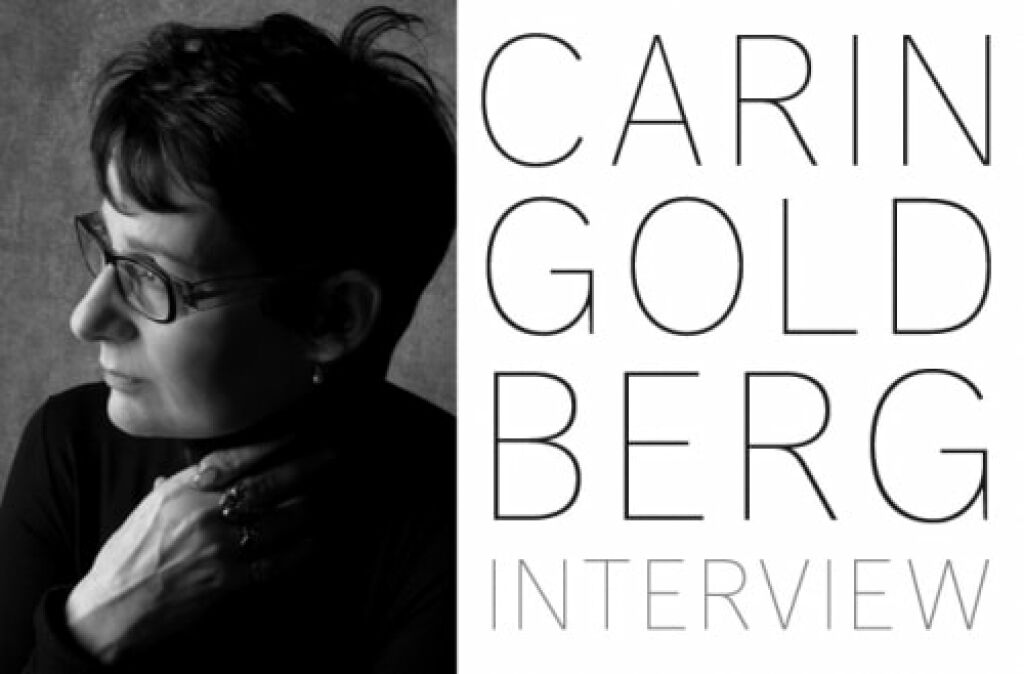 Where did you study and who were some of your influences/design heroes?
I studied at The Cooper Union and majored in painting. There wasn't much of a design department during the years I attended. I didn't know much about graphic design so it wasn't until much later that I began to have heroes. I did have a class with Herb Lubalin and Seymour Chwast but I was too naive to know I should be genuflecting at the time.

What was the climate at CBS Records when you worked there (late 1970s)? What were some key projects you worked on and when did you leave and why?
Exciting, extreme, exhilarating wildly creative, chauvinistic, hedonistic, hilarious, fun as hell, mean, nuts. Sex, drugs, and rock and roll. I started in the advertising department and worked on great projects with great people. Patti LaBelle and Kenny Loggins were artists I worked with on a regular basis. I left for a year to design covers for Atlantic Records and then came back to the CBS packaging department and designed classical and jazz covers under the brilliant tutelage of Henrietta Condak, an unsung design hero.

About what time did you start design book covers and what led up to this decision?
I started my own studio in 1982. I continued designing record covers for a few clients. The J. Geils Band was a steady client and it was around then that I designed/art directed the cover for Madonna's debut album. During that time I designed all of the covers for Nonesuch Records. Designing book jackets wasn't necessarily a decision. It just seemed like a natural transition. Plus, the work was there to be had. I will say though that it took about a year to convince book jacket art director's to give me work. They couldn't make the leap from album covers to book jackets. Thankfully, Louise Fili, Judy Loeser and Lydia Ferrara, all art directors at Random House, were good enough to jump-start my career as a book jacket designer. From then on the work poured in for over fifteen years from every publisher in the country. I designed over 125 covers a year.

You have been called many things in your design career pertaining to your knack at breaking the rules and bending stylistic integrity. Tibor Kalman attributed the terms "Pillaging History" and "jive Modernism" to your work. In retrospect and perhaps at the time, did you take this as a compliment or did you have theoretical opinions as to what you were trying to explore with your work?
This whole thing has been dragged through the mud up, down, left and right! At the time I was oblivious to what Tibor Kalman said about me and my colleagues. I wasn't at the conference. I was too busy working my ass off. It wasn't until much later when all anyone could ask me was how I felt about the matter. That's how I became acutely aware of this never-ending drama. (I just sent a fairly curt note to Armin Vit chiding/begging him to  please give this thing a rest too. In his most recent book, the ONLY mention of my 30-year career is that damn "post-modern" Ulysses cover. It's insulting and infuriating. I've talked about this ad nauseum. I'm done. 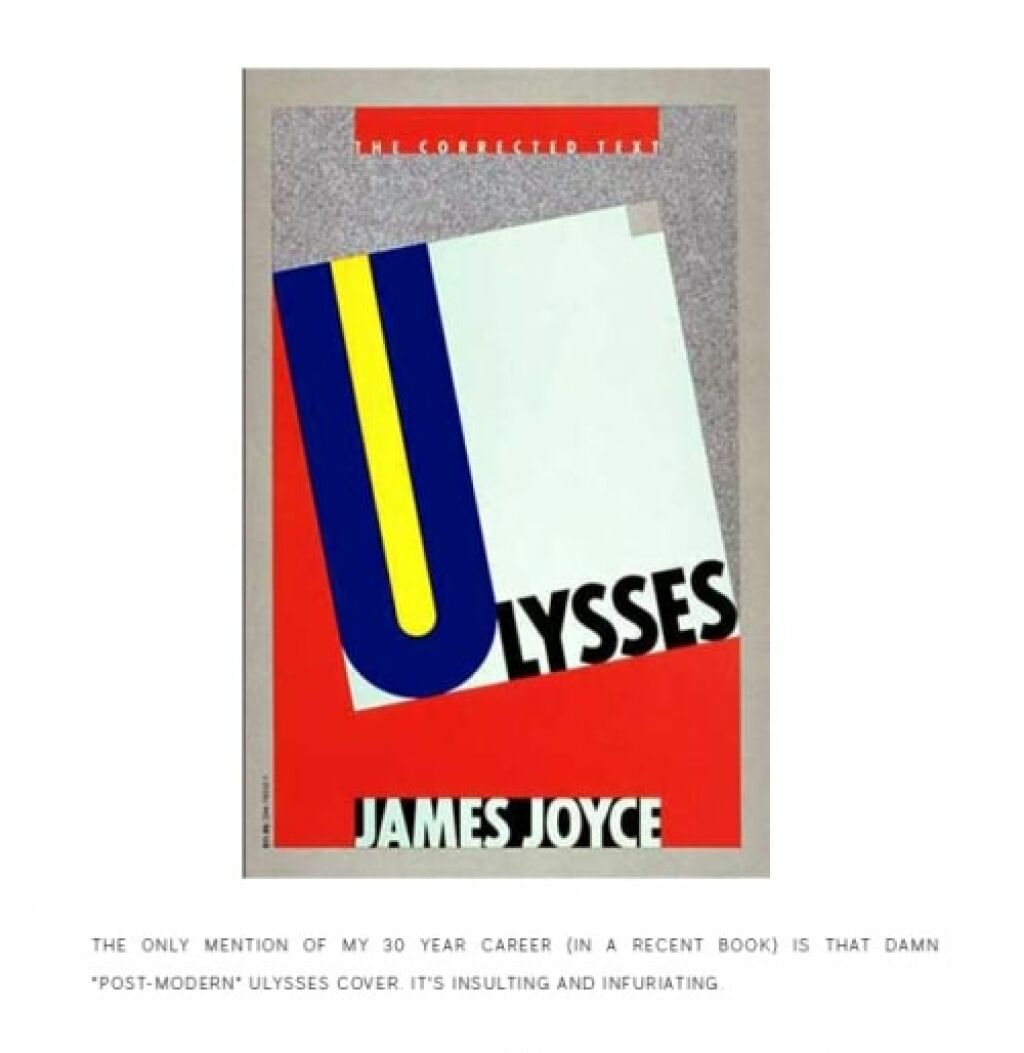 How much of your work would you describe as being a personal statement and testament about design and how often do you try to make your clients understand things from your perspective and fight for your design?
I solve problems. Period. Of course my "personal" statements are there. Sometimes more overt or prominent. No accident. It all depends on the specific situation. But form and ideas are always in tandem. I believe in "fighting" for the work when appropriate and when I have the opportunity. But "fight" is really not an accurate word. It's much more dignified and intelligent than that. I'm good at it. I have been teaching for 27 years. I know how to talk about design, intent, ideas…

Not that quantity matters, but about how many book covers have you done in your career?
A zillion..

What genre of books do you enjoy working on most?
Good, smart books written by smart, thoughtful, responsible thinkers. I've designed covers for every genre.

Your treatment of type, image, composition and color is at times very characteristic. Was there ever a time when you consciously tried for a style—a look—in your work?
I never thought consciously about creating a style. The content drives the style when style is obvious or necessary. Again, it depends on the circumstances, the brief, the medium, the social/political/cultural climate.

You have had the fortune of working on some amazing titles. Who were some of your top clients over the years who truly served up a good meal?
Kurt Vonnegut is one good example. 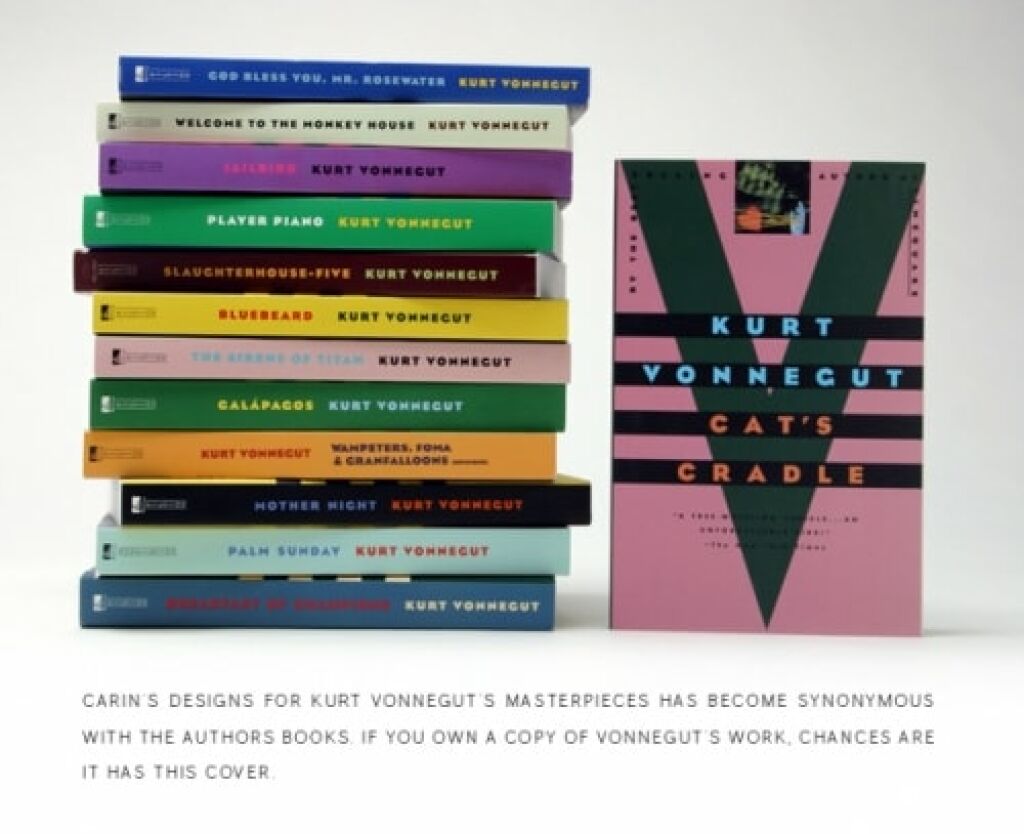 Name three titles that you have designed covers for that you feel define you, or in the least, are your favorite…
Can't. Won't.

You have owned your own studio for many years now. Do you have a routine to get into your work everyday?
I have been operating my studio since 1982. I get to work at a normal hour. I'm pretty disciplined. I like working. I love designing, thinking, working with smart, inspired people. I hate all the inane, enervating crap in-between.

Who would you name as some of the best book cover designers working in today's publishing world?
Paul Sahre, John Gall, Peter Mendelsund, Rodrigo Corral, Dave Eggers, Barbara DeWilde. Lot's of new kids on the block are doing some nice work too. The bar has been set very high by the last few generations of book cover designers.

What are you working on these days? Some of your recent were for Other Press; are you still working on book covers much? Do you outsource much work or is it a one-gal show?
Yes, I have done several jackets for Other Press over that last couple of years. I enjoyed working with them and designed a few winners for them. I don’t design too many book jackets in general unless it's a great project with a great art director behind it. I designed the re-issue of Miss Lonelyhearts recently for Rodrigo Corral at New Directions. I recently participated in the Nabokov series masterminded by John Gall at Vintage. Both great projects with strong, supportive art directors at the helm. I do an assortment of work: magazine prototypes, branding, editorial illustration, posters, books, etc. I don’t outsource anything. I’m a small operation and design everything with the help of young interns/designers, many who have been my students at SVA [New York’s School of Visual Arts]. 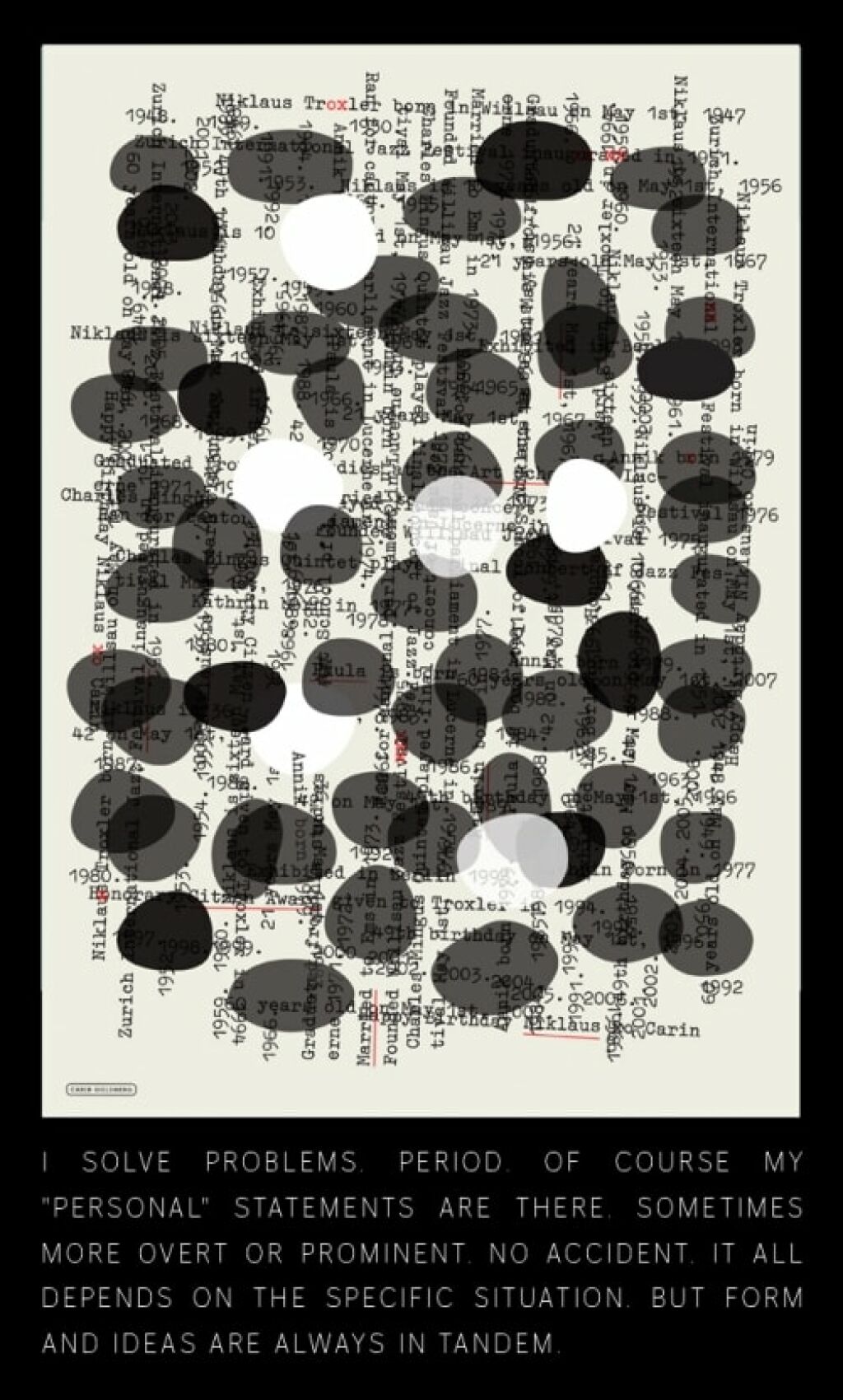 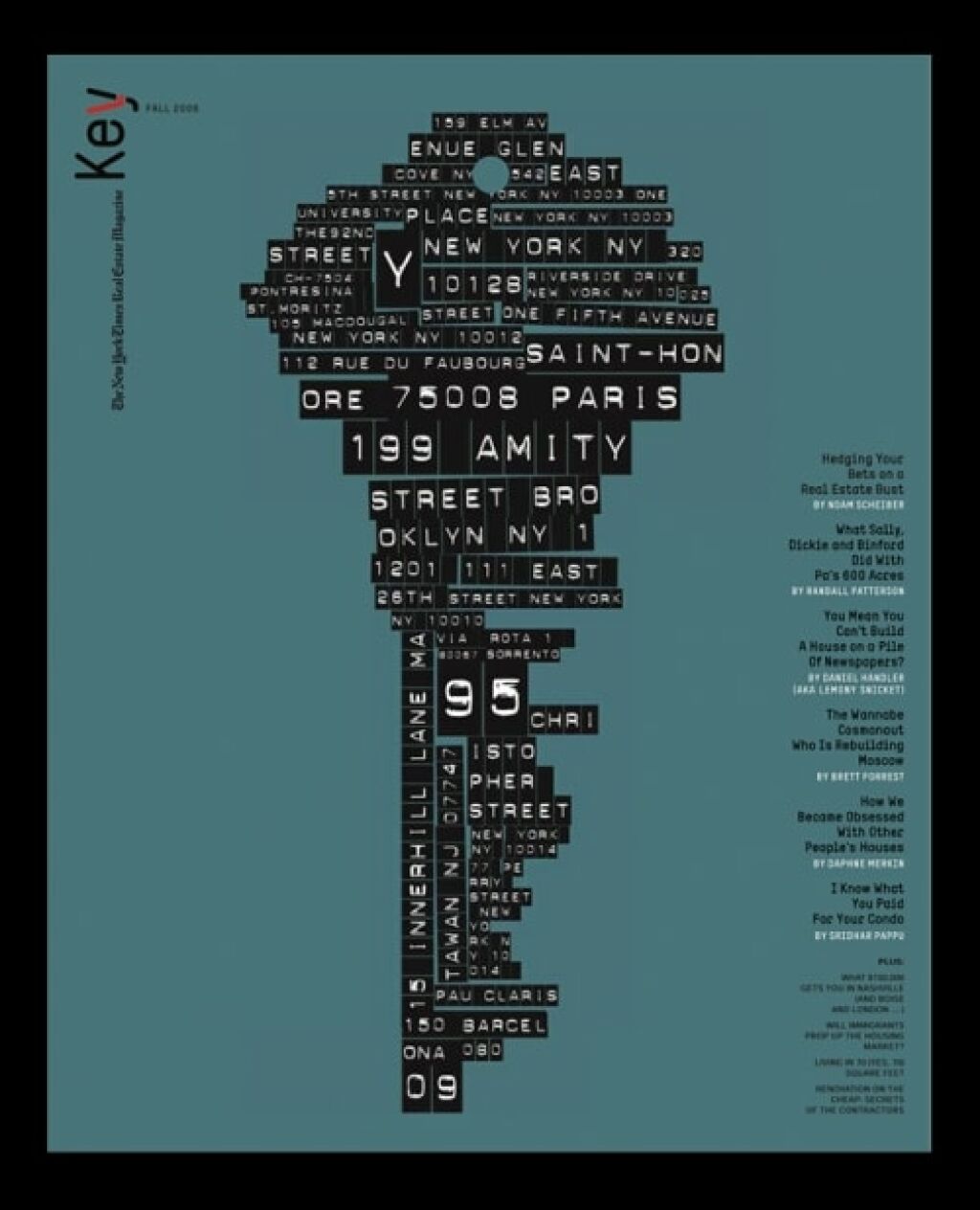 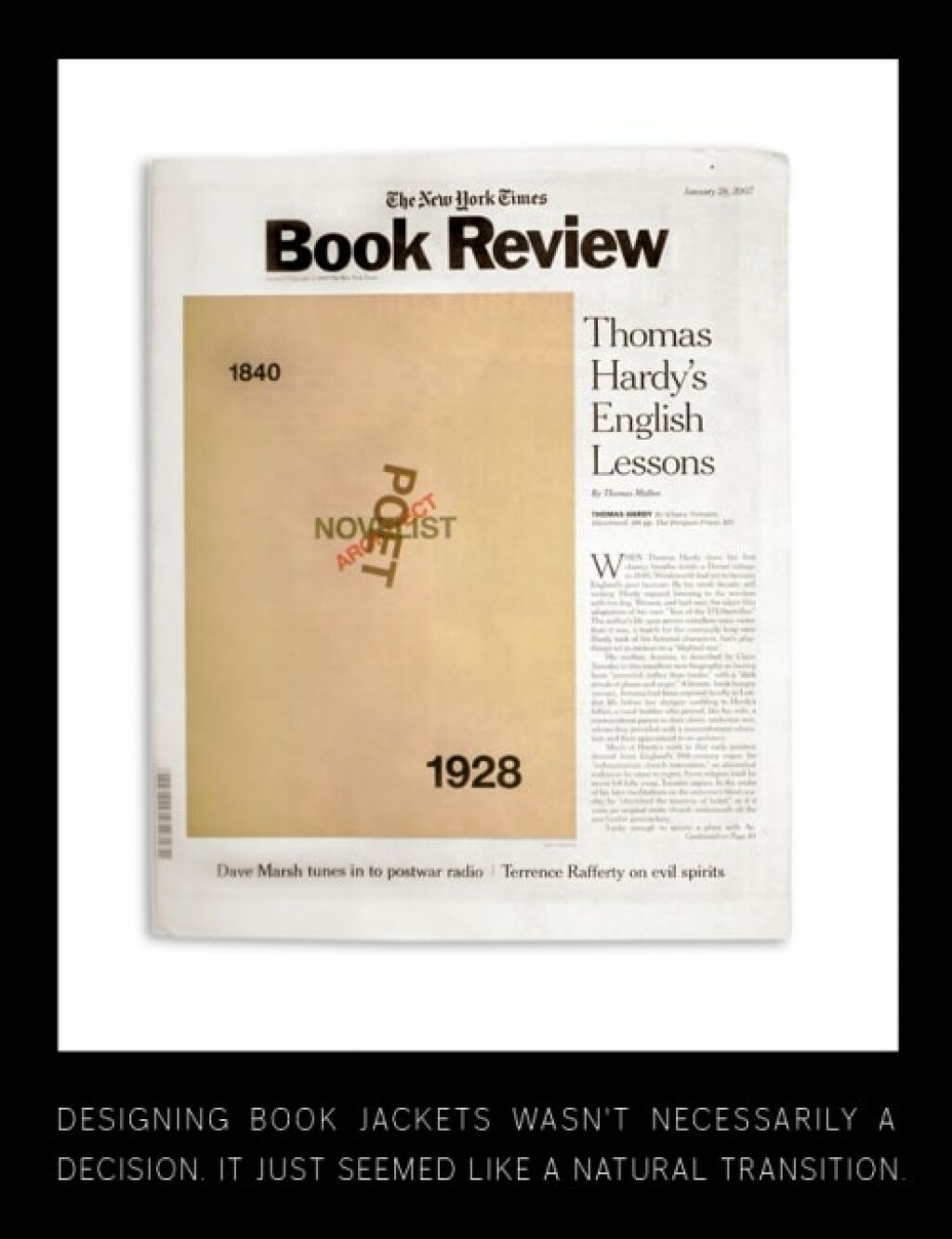 I may be wrong, but I think that many young designers today lack the historical reference in their approach to their work. Do you feel the same way and what are some of the things that you feel are lacking in design education these days?
It's a huge problem. Most young designers know nothing about those who came before them. It's a huge hole in their education. It's crazy since there are hundreds of books, lectures and websites that provide a reference to this work. I can't imagine pursuing anything I design without looking at my books. Not necessarily only graphic design books but all forms of art, design, craft, photography, architecture… all the arts. That includes theater, film, television, fashion. A graphic designer has to covet and respect all of it.

What do you feel is the future of the book and the role of the book designer in the next ten years?
I'm not a sentimentalist. The e-book is inevitable. And they make sense. The publishing industry can't sustain the old/current model for making/selling books. It's wasteful and unsustainable. They have to embrace change. Good content will continue to be created whether it's represented on paper or on a screen.  And there will always be a market.albeit small, for beautiful picture books. The role of the graphic designer is shrinking but it's in our court to get involved in the next wave of imagery and ideas. Good designers waited too long to get in there early on. We let geeks design websites and now we are stuck with badly designed, uninspired ones with a bogus philosophy behind it. Hopefully, we won't miss the boat and relinquish the opportunity, again, to the wrong people.

Thank you kindly for your time—and, of course, your historical contribution to book cover design. This was a very informative interview.

Kimberly Glyder: On work, balance, and working with good people

Kimberly Glyder: On work, balance, and working with good people

Matt Roeser has an innate sense of curiosity about everything...

Matt Roeser has an innate sense of curiosity about everything...